I always say that no one has a more interesting job than I do. (Granted, I know this is not the case but my hope is that everyone gets to make a similar claim when thinking about their work using verbs like "rewarding" or "exciting" or "satisfying"...) One day I found myself with a meditation client ready to launch into my usual speech about the various Chakras - what they govern, what an unbalanced Chakra might feel like, etc. When I started explaining the first chakra my spiel sounded something like, "The first Chakra is the Root Chakra and is associated with safety and security (think job, home, money, survival). A Root Chakra that is out of balance can manifest as anxiety disorders, fears, or nightmares. Physical imbalances in the Root Chakra might feel like lower back problems or issues with the feet and legs to name a few." I checked in with my client to make sure their eyes hadn't glazed over and then all of a sudden, I heard that song from Gloria Gaynor pop into my head. "I will survive! Hey, Hey!" I giggled out loud and my client looked at me wondering what the joke was. Right then, it dawned on me that if a healthy Root Chakra could sing, that would likely be one of its favorite anthems. It's a song about a woman realizing that she is strong, grounded and totally capable! Right then, I realized that I needed to write this blog - a blog about our Chakras' jukebox. I knew it would be a fun blog to write as well as a useful tool to help newbies remember some of the basic characteristics of the Chakras through song association.

So, here it goes. Here are my top picks for songs sung by healthy singing Chakras.

Chakra One: The Root Chakra - "I Will Survive" from Gloria Gaynor

This classic song from the Disco era of the 70's is a song about strength and survival. When this song is played at a wedding, you best believe all the girls will band together to belt this out. As I mentioned before, it is a song that reminds us that we are strong and will carry on and a healthy Root Chakra is all about being grounded and strong in this world. Don't worry, men... this applies to the boys as well.

This song from the 70's is probably best known for its chorus of "Woah - Woah - Woah, Feelings" over and over again. While Morris Albert was the original artist, it was redone time and time again, probably because it makes us feel something deep inside when we hear it. The Sacral Chakra is all about the emotional center. It is where we store those emotions (often times for far too long) so it is the sign of a healthy Sacral Chakra to feel those "Feelings, Woah - Woah - Woah, Feelings" and then move on. Let me repeat that last part - and then move on! (The Sacral Chakra is also the center of creativity and sensuality so Marvin Gaye's, "Let's Get It On!" would be an appropriate song choice as well.)

Chakra Three: The Solar Plexus Chakra - "I am Woman!" from Helen Reddy

This song was released the year I was born and is a personal favorite of mine for many reasons! But, keeping in line with this blog post, it is the perfect song for the Third Chakra. The Solar Plexus is the power center in all of us and a healthy Third Chakra knows who it is and has loads of self-esteem and confidence. If the Solar Plexus could sing, it would shout, "I AM WOMAN" (or I AM MAN...again, this applies to the boys).

Chakra Four: The Heart Chakra - "All you Need is Love" from The Beatles

This song was released in the late 60's by The Beatles and is absolutely, positively the song a healthy Heart Chakra would sing. The Heart Chakra is all about love - giving love, sharing love, receiving love - all kinds of love! It can be romantic love, brotherly love, and self-love. The word love is repeated nearly 40 times in this classic Beatles song and pretty much sums up the anthem of the Heart Chakra in 5 simple words, "All you Need is Love!"

Chakra Five: The Throat Chakra - "Express Yourself" from Madonna

This Madonna song was a huge hit in 1989 and gave us permission to not only be who we are but be free to express that honestly. That is the song of a healthy Throat Chakra who is all about being expressive and authentic. "Don't go for second best, baby!" When the Throat Chakra is in balance we can express what we think and what we feel which is a very healthy thing to do.

While this song was born in the 70's by none-other-than John Lennon from The Beatles, it continues to be a song that resonates with the world as we work to envision a better tomorrow. The Third Eye Chakra is all about vision, perception, imagination and seeing the big picture using insight and intuition. A healthy and active Third Eye Chakra is able to see clearly with spiritual awareness. (By the way, it is reported by many sources that John Lennon was a huge advocate of meditation.)

Chakra Seven: The Crown Chakra - "The Rainbow Connection" from Kermit and Miss Piggy

This song also has immense amounts of meaning for me but in short, it is the epitome of what a healthy Crown Chakra would choose to sing. The Crown Chakra on the top of the head reminds us that we are all connected, not separate, and with this understanding brings joy, peace, serenity and a feeling of oneness. I think many of us feel alone in this world and disconnected, even from ourselves. But if we listen to the lyrics, they remind us all of what the Crown Chakra already knows... "Someday we’ll find it, the rainbow connection: the lovers, the dreamers and me."

So there you have it - my Chakra Jukebox's list of songs that healthy chakras would sing. Maybe these songs will help you to associate the characteristics of each Chakra while putting a groove in your step and a wiggle in your shoulders.

Check out my line of Chakra Shirts here. 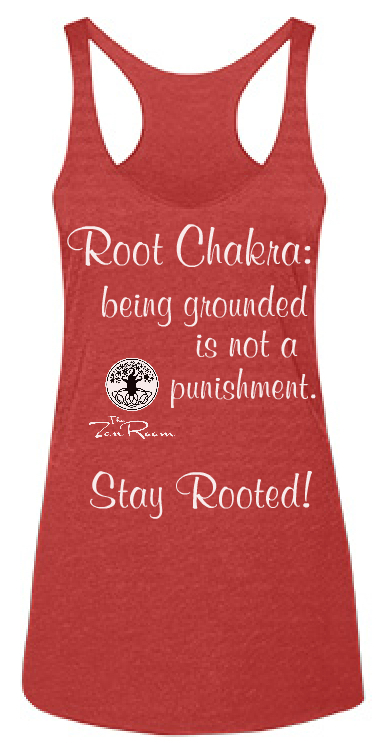